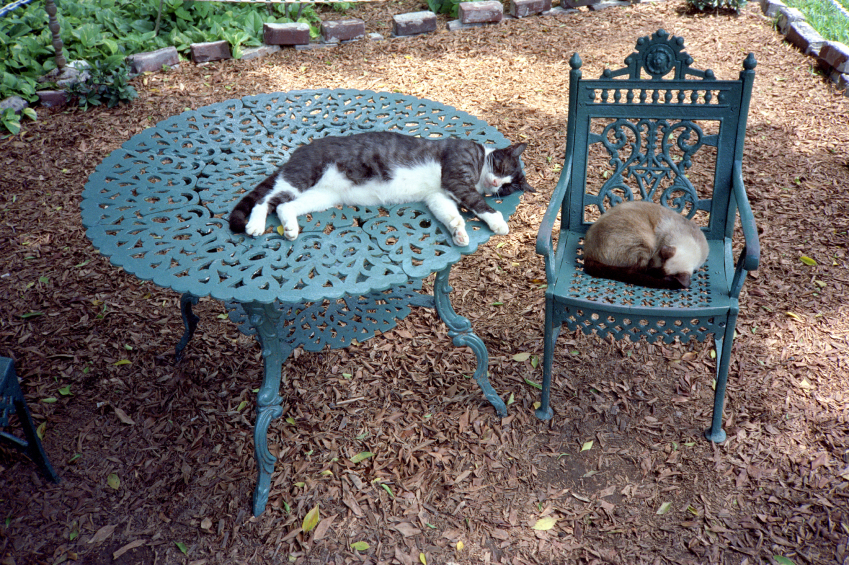 “One Cat Just Leads to Another:” The Many Cats of Ernest Hemingway

Ernest Hemingway (1866-1961), Pulitzer Prize and Nobel Prize winning author, journalist, man’s man, war correspondent, safari-taker, world traveler was a self-proclaimed cat lover.  Hemingway was proud of his cat collection, often saying that he liked nothing better than the feeling of having cats underfoot.  Calling them his “purr factories” and claiming that “one cat just leads to another”, the author once owned over 50 cats while living at his famous house, the Finca Vigia in Cuba.  Visitors to his home would tell stories of kittens in the beds and the dinner table swarming with cats; “no animal has more liberty than the cat”, Hemingway wrote observantly in For Whom the Bell Tolls and the author certainly put this into practice as his many cats evidently enjoyed free reign over every room of the house.

Initially keeping a spare bedroom as a specially designated cat room, eventually Hemingway had to cede his entire house over to his freely roaming feline companions as their population grew, feeding them generously from “cases of salmon” and drinking with them in the evenings, offering them a mixture of whiskey and milk.  It was in Cuba that he began to collect polydactyl (multi-toed) cats; along with the local sailors, he considered them to be good luck.

Once when living in a grotto in Paris as a young man, Hemingway decried that he was “too poor to even own a cat”.  With his low voice and gentle manners, Hemingway had a way with animals in general, often seeking help for strays and injured animals.  His favourite cat, a black and white tom called Boise, was immortalized as a character in Hemingway’s novel Islands in the Stream. With names like Princess Six-Toes, Feather Puss, Zane Grey, Clark Gable, Uncle Wolfer, Furhouse, Christobal and Good Will, Hemingway believed in the individuality of each of his pets, professing a deep regard for what he called the “absolute emotional honesty” of cats.

Today the Hemingway House Museum in Key West, Florida, where the author lived in the 1930s, is home to over 40 cats, notoriously the polydactyl cats that have become synonymous with Ernest Hemingway.  To this day the museum claims that its cats are the actual descendants of Hemingway’s original white multi-toed cat, Snowball.  As in the authors’ lifetime the cats roam freely and are protected there, safely cared for per the terms of Hemingway’s will.  The Hemingway House Museum is open and welcoming to visitors, as are the cats.  While the rooms of the house are restricted to public access, the cats are not hindered by “Do Not Touch” signs and velvet ropes; the creatures that he so adoringly called his “love sponges” still sleep on Hemingway’s bed, lounge on his writing desk and wander the gardens at ease.